UPDATE  - the boys are making excellent progress, enjoying great conditions and literally flying along. ETA tomorrow , Sunday!
Myself, Clara and Niall's parents have safely arrived in Cayenne and we'll be off to the suppermarket to stock up on ice cold Coke and beers.
The champagne really is now on ice!!!!!

Day 47 - Sat 22nd April - We really are flying. Colin and I just did an 8.7 mile watch - previous highest on our crossing was 7.2! Conditions are incredible. We'll defo be in Sunday - anytime from late morning. Will update later today. Am tired but really feels close now so adrenaline kicking in.

Day 46 - Fri 21st April - Nice little competitive edge forming between the 2 watches. We're currently winning on 6.8 miles! But if we keep at 6 knot pace we'll arrive in Cayenne SUNDAY late afternoon!! Obviously as we know tides are fickle as hell but we've not encountered a single cargo ship for ages so they must all be hugging the coastline in the tide. Augers very well.

From Niall - Day 45 - Thurs 20th April
Interesting night watch - Ralph lost an oar over the edge - went back to try to find it but too hard to find a black oar at night. oh well - good job we have spares!

Boat flying along now -72 miles in last 24hrs. Currents cooperating nicely letting us drift up a little so at the moment we'll go straight to Cayenne. 175 miles to go!!


And then my self indulgence and thanks.

Today I fly to French Guiana and this is my blog!!!!!

We are down to the bitter end of this rollercoaster journey now and noone is more relieved, thrilled, excited than I - I always knew this adventure was going to be a massive undertaking for Niall both physically and mentally but what I don't think I had prepared myself for was how much of a mental, physical and emotional challenge it would be for me too.
In some ways I thought it wouldn't be dissimilar to his Clipper experience (for those who don't know, Niall crossed the Pacific Ocean racing a sailing yacht 5 years ago and was away for a similar amount of time) but I was wrong.

I don't want to get dramatic and say I thought he was going to die but there has been a never-ending shadow of potential failure looming large ever since he even began talking about this. No it wouldn't have been a life or death situation (except in the unlikeliest of circumstances I kept telling myself) but it would have, or could have, ripped this dream from under his feet in a heartbeat which would have been bitterly disappointing after so much time and energy invested in it. Even as we have approached the final stages the swings in emotions have been huge with more and more at stake the closer to the finish they have gotten.

I may not have been out on that boat physically but I have lived and breathed every high and low with them and it's been one of my biggest challenges of endurance too. I have never known time go more slowly, not least in the middle of a dark and lonely night when the tracker hasn't been updated.. unbeknownst to us all was fine but being alone with your imagination and pictures of a big wide scary ocean isn't a fun place to be! For a lot of it, it's felt like being in a strange dream-like state... not wanting to think too much, to hope too much, trying not to worry too much... but here we are and the end is really finally in sight!
As tough as it has been though, there has never once been a time when I regretted giving the green light to this project, nor any malice nor anger toward Niall but it's now over 7 weeks since I last spoke to him, 9 weeks since we saw him and that is more than long enough!

In his absence I have been plenty busy with our business, my work and of course the kids. And they deserve their own special mention - they have been absolutely amazing. Charlie has taken it upon himself to accept the promotion to man of the house and has been a total star. I couldn't have asked more from him and, whilst he's missed his Daddy, the experience as a whole has only been positive for him.
Joseph, well our little clown has kept us all smiling and he's still 'not decided if he's missing his daddy' but he really wants 'creche ellie' back in one piece and preferably not wet. He's also a living, breathing reminder of his Dad's stubborn streak!!
This rather unique folly of their Dad's will no doubt have a huge underlying impact on them and will be proof to them that anything is possible - No mountain too high, no ocean too wide, no challenge too difficult. Who knows what they will go on to do... I am not sure my nerves / heart will take it!! 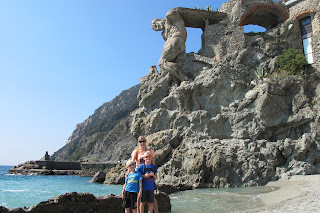 Family Bates with Daddy in the background!
I would also like to say a few thankyous - firstly to my parents who have been wonderful throughout... they have seen the emotional impact on me, supported me, put up with my moods and come along on some of our adventures to help pass some of the interminable time. And of course they are facilitating my journey out to meet Niall now by looking after the kids. THANK YOU.
My inlaws have been equally supportive and a steady voice of calm when I've needed it most. I can't ask for better family and am delighted they are getting on the plane with me to French Guiana today.

Also a special mention to Clara, Clement's girlfriend and Gemma Chalk  - having you both to lean on over the past few months has been brilliant.

Lastly thanks also to all the friends and family near and far - your constant messages, calls, invites, pre-cooked meals, drinks, jokes and hugs have all helped immensely. You may never know how much but I am truly grateful.

Time to get this boy to the finish line and home so it can be my turn to go off on an adventure....!!